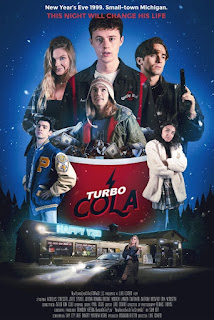 Turbo Cola is set right before the millennium in 1999, a time I remember well. The film starts with a TV report talking about what the 21st Century will bring, and straight away for those old enough, you get a feeling of nostalgia and a hope that this film will take you back to forgotten time before Smart Phones and Social Media.
Austin, (played by Nicholas Stoesser) works at the Quality Mart gas station, he has decided he wants to rob the ATM there, and along with his friend Swearsky, (played by Jared Spears), they start to plan how they are going to do it. Austin talks about his dream of moving to New York for Mary Jane, (played by Jordyn Denning) who will start University there soon. Because they plan to rob the ATM on NYE of the Millenium, it means they are going to miss the party of a lifetime.