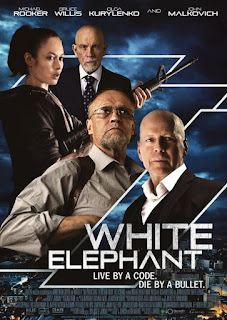 Is this my 5th or 6th Bruce Willis film review this year? The last few times I was certain it would be the last ever new Bruce Willis release due to his recent health diagnosis, but here we are again.
This time we have something of a star-studded cast for White Elephant.
Michael Rooker (a regular in Bruce Willis films this year) plays Gabriel Tancredi, and he is the lead character in the film, as you know by now Bruce Willis in maybe his last 10 films has played more of a cameo type of role.
Tancredi is an enforcer for mob boss Arnold Solomon, (played by Bruce Willis), he has Carlos Garcia (Vadhir Derbez) deal with a rival of Solomon. As he blows him up, it just so happens that a couple of cops Vanessa Flynn (Olga Kurylenko) and Walter Koschek (Michael Rose) are tailing him and witness the explosion. Garcia escapes, but realising that the cops saw him, Solomon gives him 48 hours to take them out. Koschek is easy enough but Flynn quickly becomes a problem.
At this point you would think that the film would centre on Vanessa Flynn, a cop formerly in the military and suffering with PTSD from her deployment in Afghanistan, but instead it centres on Tancredi, as he takes care of another rival, and does the bidding of Solomon, eventually Tancredi's conscience catches up with him, mainly due to the death of his wife, he turns on Solomon and sort of partners with Flynn.