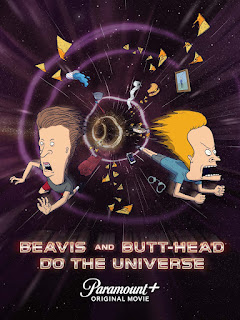 Beavis and Butt-head Do the Universe has been getting rave reviews, and although I will admit I never really watched them back in the 1990s, from the odd episodes I have seen over the years, I always thought I should go back and watch them properly, but alas I never did.
Well now they have a new film out, as well as a two season TV show planned, so I thought I should sit down and give them my attention.
If you have never seen Beavis and Butt-head before, they are simply put a couple of teenage virgin slackers, famous for their apathy, lack of intelligence, dumb humour, and love of rock bands AC DC and Metallica.
The film starts in 1998 in Highland Texas, while at school, and kicking each other in the balls, they are told by a teacher that there is a science fair, which of course they were totally oblivious of. They decide to enter the fair, and before you know it, they have burned down their school. They end up in juvenile court, where the judge sees them as at-risk youth and sends them to space camp at the Johnson Space Center.
While at the space centre they are playing with a space docking machine simulator, for them it is just a phallic toy for them to mess with, but NASA astronaut Captain Serena Ryan (Andrea Savage) sees them as having natural ability at docking spacecraft, so they are invited to train as astronauts. Of course, being dumb Beavis and Butt-head misunderstand Serena and think she wants to have sex with them, so they agree to the training believing they will have sex with her in space. Before you know it, they have finished training and board the Space Shuttle Endeavour to study a micro black hole. 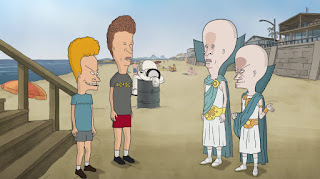