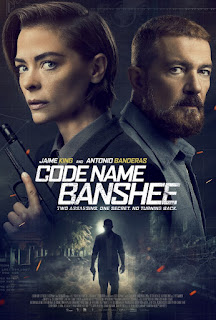 Assassins, revenge, and everything going wrong, this sounds like my kind of film.
Jaime King plays Banshee, we first meet the character during a CIA interrogation. We learn that her father and a man called Caleb (Antonio Banderas) have both been designated as traitors after a mission went wrong. Banshee's father is presumed dead in an asset transfer, but no body was ever discovered. Caleb disappeared during the ambush. The CIA have put a bounty of $10m on the head of Caleb. Banshee is sceptical of the official government account of what happened.
Fast forward a few years and Banshee has become a contract killer. Along with hacker Kronos (Played by Aleksander Vayshelboym), she takes out whoever she is paid to. One day while pursuing a target who is a congressman, she is attacked by Anthony Greene (Tommy Flanagan) who is lying in wait for her. He is after Caleb, and believes that Banshee was trained by Caleb and as such will know of his whereabouts. Banshee escapes, but she realises she needs to find Caleb, warn him about the bounty and find out what really happened to her father.


Full Review and Trailer at