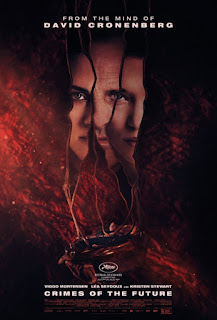 The latest film "from the mind of David Cronenberg" is one that will truly freak you out. Even though I just watched it, I am slightly unsure of what I just watched, if it was genius, or just weird.
The film is set in an undetermined dystopian future.
We start with a mother and young boy Brecken, for some reason the young boy decides to start eating a plastic bin. His mother watches on from the door. Later when the boy is sleeping, the mother looks at him and with a pillow suffocates him. Her ex-husband Lang (Scott Speedman) finds the boy. Well, that is a depressing start to a film, but also sets up the weirdness you are about to experience.
In this future, pollution and climate change have forced scientists to develop biotechnology, machines and mechanical computers that can directly interface with the human body. I say human, but I am not sure if that is what we are dealing with any more. It seems that people have undergone some biological changes of indeterminate origin. The most obvious of these changes is the lack of any physical pain, or disease. You would think this is a good thing, right?. One interesting by-product of this lack of pain is the ability to undergo surgery while fully conscious.
Insert people having crazy body modifications, man with lots of ears all over his body is one example.


Full Review and Trailer at
http://www.beentothemovies.com/2022/07/review-crimes-of-future-2022-stars.html 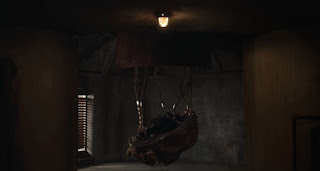