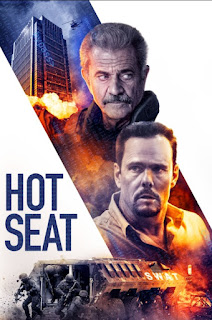 With Mel Gibson taking on more of these low to mid budget films, I can say I am firmly in the approval section, for I like Mel Gibson, and despite his problems over the years, he is a good actor and does bring something to the roles he takes on. With that said Kevin Dillon is the true lead in this film.
Kevin Dillon plays Orlando Friar a reformed hacker who now works as an IT expert, spending his days helping old ladies with their internet routers over the phone.
After being called into work on his daughter's birthday, Orlando gets on a zoom call with his wife, and with his daughter, neither are very happy with him, suddenly he finds that his computer has been hacked, and a mysterious voice tells him if he gets off his chair, it will explode. Caught in such a position, Orlando agrees to help this mysterious person with some hacking with the knowledge if he doesn't, not only will he go boom, but the mysterious person will go after his family. And even worse the mysterious man has already framed Orlando as the bomber of an earlier explosion.