REVIEW: Lightyear (2022) - NOT Starring Tim Allen - But does star Peter Sohn as Sox 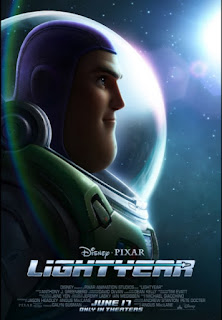 In the Toy Story films, there was a toy called Buzz Lightyear, that toy was based on a film, that film was called Lightyear, and this is that film that has now been released, so in some ways this is a prequel to the origin of a Toy from a film that was made 27 years ago.
Now in the Lightyear film, Buzz Lightyear is voiced by Chris Evans, yet the toy that was made from that film, instead of casting Chris Evans, they cast the much superior voice of Tim Allen.
This is what Disney Pixar want us to believe. Can you think of any toy that has ever been released that did not have the voice of the original actor?
First of all, Buzz Lightyear will ALWAYS be Tim Allen, anyone else is just a poor imitation, and with that said, that is the first huge problem with this film. They changed the actor who played the character. So instantly I dislike the new Lightyear, even though it is not the toy character but instead a real character from a film.
Now I have that off my chest, let's get to the story.....