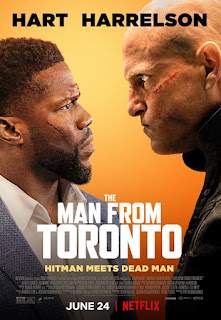 Kevin Hart and Woody Harrelson are back in the latest big Netflix action comedy.
Kevin Hart plays Teddy, a grifter trying to make it big with various online tutorial business ideas. Failure after failure leads Teddy to try to sell his idea of non-contact boxing to local gym owner Marty (Martin Roach), Marty of course rejects the idea, as well as pointing out some fliers that Teddy made for him had no address or phone number on them for his gym.
Teddy feeling down wants to do something for his wife Lori, (Jasmine Mathews), so he decides to send her on a spa day, and book a secluded cabin for them both, so they can "make babies". Unfortunately, the printer is low on toner, and while going to the cabin to prepare things, he can't read the address, and goes to the wrong place. He goes inside and finds two men who are awaiting the arrival of someone called The Man from Toronto, they believe that Teddy is this man, a brutal assassin who is a master of the art of interrogation. Since no one gets to see the face of The Man from Toronto, they just assume Teddy is him and encourage him to interrogate a man they have as a captive. 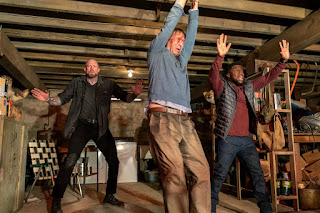