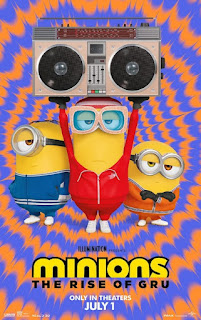 Minions The Rise of Gru is a prequel to the 2015 film Minions, and the 5th film overall in the Despicable Me franchise
Steve Carell stars as the young 12-year-old Gru, and Pierre Coffin as the voice of the various Minions.
The year is 1976 and a young Gru voiced by Steve Carell dreams of becoming a supervillain, he has even hired his own little Minions to help him.
One day Gru receives an audition invitation from the Vicious 6, a Supervillain gang led by Belle Bottom (voiced by Taraji P. Henson), they have recently turned on the founder of their group supervillain Wild Knuckles (voiced by Alan Arkin) while stealing the Zodiac Stone and kicked him out of the group, and presume he is now dead.
Gru attends the audition along with other supervillain wannabes, but the interview goes badly, and they mock Gru due to his age. Somehow however Gru manages to steal the Zodiac Stone from them, he escapes with Minions Kevin, Stuart, and Bob, but when cornered he hands the stone to Otto and tells him to meet him at the basement lair.
Back at the Gru's basement lair, Otto steps forward and hands Gru a large pebble with googly eyes on it, Otto had swapped the Zodiac Stone for the pebble at a child's birthday party. Furious Gru fires the Minions.