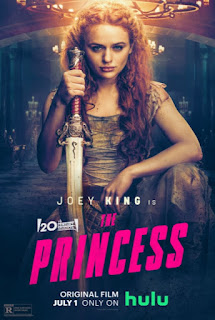 For a moment I thought we had a 2022 remake of The Princess Bride, but alas we must wait longer for that. Instead we have a classic story, a Princess (Joey King) is to be married off, and of course she is not interested.
Set in medieval times in a realm run by a King (Ed Stoppard) and Queen (Alex Reid), it becomes apparent that they have no male heir to the throne. Just two daughters. The film starts with one of those daughters chained up in a bed at the top of the tower. The King had planned for her to wed Julius (Dominic Cooper) the evil son of a diplomat, but after she left him at the altar Julius and his whip wielding henchwoman Moira (Olga Kurylenko) take the castle by force, and ultimately force the Princess to marry him, so he can have an undeniable claim to the throne.