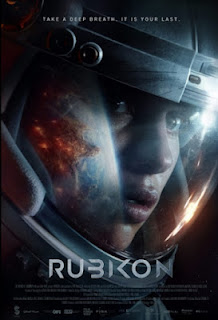 The year is 2056 and we find ourselves with a skeleton crew of astronauts aboard the space station Rubikon, we have German-born Captain Hannah Wagner (Julia Franz Richter), British male Gavin (George Blagden), and Russian Dimitri (Mark Ivanir).
The world below is facing huge changes to what we know, the world is run by giant corporations where the rich live in paradise while the poor starve and choke. Ok not that much of a huge change, in fact pretty much identical to 2022.
Seemingly out of nowhere, a giant toxic cloud starts to cover the face of the earth, but without any signs of a Super Volcano erupting or an asteroid strike, the crew aboard the Rubikon apparently have no idea what has caused it, nor do they have communications with anyone on earth to tell them what is happening.