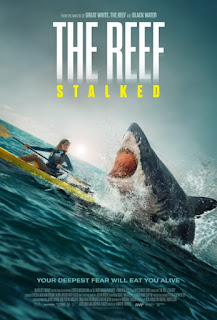 The Reef Stalked is the latest shark film to try get you to stay out of the water. As with all Shark attack type films, they will all be compared to Jaws, and as such I happen to have a Jaws soundboard app on my phone, which is always fun to use when watching such a film and seeing if you can judge the music with the attack.
The film starts with Cathy (Bridget Burt), Jodie (Ann Truong), Nic (Teressa Liane) and Lisa (Kate Lister) diving and catching fish, when finished they take a photo together, as they are going back to the care park, Greg (Tim Ross), Cathy's husband appears, despite arranging to go home on her own, she goes back with Greg. Nic sees Greg shouting at Cath by their car. Later in the day Nic receives a text from Cath, and rushes to their house. She finds Greg inside, he tells her that Cathy made him do it, Nic then finds Cathy's lifeless body in the bath, Greg had drowned her.