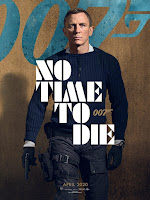 Daniel Craig is bowing out as James Bond after No Time To Die. But he's making his stint as 007 last as long as humanly possible. Not content with playing the MI6 for longer than any other actor, his swansong will also be the longest Bond film in the franchise, according to runtime details released by cinemas in the US and the Netherlands.

US cinema chain Regal has revealed that the 25th Bond film will clock in at 163 minutes – that's two hours and 43 minutes fact fans – which beats the previous longest Bond film, Spectre, by a quarter of an hour. Oddly enough, Craig's stint also includes the shortest Bond film, Quantum of Solace, which had a runtime of 106 minutes. It felt a lot longer, though.

https://www.esquire.com/uk/culture/a31113993/no-time-to-die-runtime-james-bond/
Labels: No Time To Die