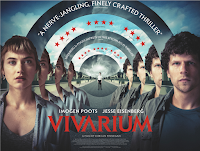 Following rave reviews at the BFI London Film Festival (2019), sci-fi thriller VIVARIUM will be released in UK and Irish cinemas and on digital on 27th March 2020 courtesy of Vertigo Releasing and Wildcard Distribution. It will also open the Virgin Media International Dublin Film Festival on the 26th February, and will be shown at the Glasgow Film Festival on the 27th and 28th February.  The film stars The Social Network’s Jesse Eisenberg and Green Room’s Imogen Poots, and is from the producers of cult hits Mandy and The Void.

During their search for the perfect home, Gemma (Poots) and Tom (Eisenberg) find themselves trapped in a mysterious labyrinth-like suburban neighbourhood named Yonder. All attempts to escape end in failure, culminating in the discovery of a baby on the pavement outside house number 9 with the instructions ‘raise the child and be released’. Reminiscent of the likes of Get Out and TV’s Black Mirror, VIVARIUM is as thrillingly provocative as it is wickedly enjoyable and takes you on a trip into an unforgettable suburban Twilight Zone.