Matt Reeves Confirms Production on 'The Batman' Has Shut Down Indefinitely 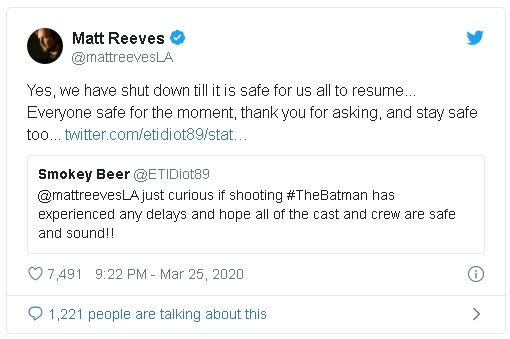 Director Matt Reeves confirmed the news on Wednesday, responding to someone on Twitter who asked if shooting of The Batman had experienced any delays.  The Batman had been filming in Leavesden Studios in Hertfordshire, England and Glasgow Cathedral, in Glasgow, Scotland at the time of the shutdown.

The Batman is an upcoming American superhero film based on the DC Comics character of the same name. Produced by DC Films and distributed by Warner Bros. Pictures, it was developed as the tenth film in the DC Extended Universe and a reboot of the Batman film franchise.