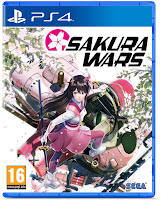 "As of today, the flower Division is in your hands."

The Imperial combat Revue takes the stage as Tokyo's defence force against a demon threat in this extravagant adventure. Soldiers in wartime, but theatre performers in peacetime, the revue's flower Division is not living up to their legacy and is at risk of being shut down. As newly appointed Captain seijuro kamiyama, it's up to you to turn the team around.

Sakura Wars is a Japanese steampunk media franchise created by Oji Hiroi and developed and owned by Sega. It is focused around a series of cross-genre video games. The first game in the series was released in 1996, with five sequels and numerous spin-off titles being released since then.