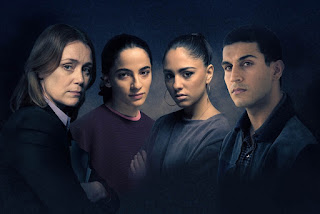 Two part factual drama, Honour, starring Keeley Hawes, airs on ITV this month. Written by Gwyneth Hughes and directed by Richard Laxton, Keeley stars as the real-life detective who brought five killers to justice in the heartbreaking true story of Banaz Mahmod, the young Londoner murdered for falling in love with the wrong man.
Produced by Hera Pictures in association with Buddy Club, Honour tells the powerful story of Detective Chief Inspector Caroline
Goode's passionate search to discover the fate of missing 20-year old Banaz. DCI Goode discovered that Banaz had been to the police five times to report threats to her life from members of her own family. Appalled that her own colleagues had missed multiple chances to save a young woman's life and prevent a so-called "honour" killing, Caroline vowed that she would not rest until she finally got justice for Banaz. It was a promise that quickly became personally consuming. This tense and emotionally vivid drama brings Caroline's long and unwavering quest to life.