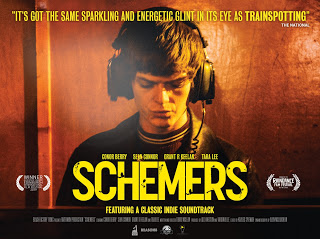 British Indie film Schemers, the true story of Dave McLean's first foray into the music business as a promoter in 1979, hit cinemas on Friday and scored the highest new entry in the UK Box Office charts amidst a deluge of positive reviews, features around the true story and interviews with the fresh acting talent. Indeed, Mark Kermode labelled Conor Berry as "a star on the rise" and predicts "seeing more of him on the big screen in the future". The first full length feature film to be made in Dundee, Schemers follows Davie (Conor Berry) who is constantly hustling for his next buck, then losing it on the horses. After a football injury, Davie falls for trainee nurse Shona (Tara Lee) and tries to impress her by running a disco. Along with friends John and Scot, the trio start promoting bands – culminating in a hugely ambitious Iron Maiden gig at the Caird Hall, Dundee. With ambition so grand they go deep in debt with Fergie, a gangster of legendary violence, Davie needs to use every trick to pull off the biggest scheme of his life.