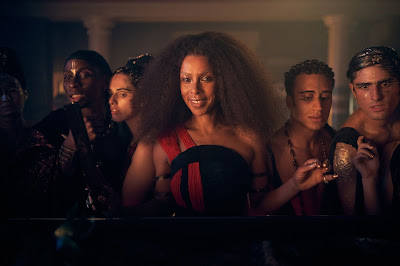 Sky today announces that BAFTA and Academy Award® nominated actress Sophie Okonedo (Ratched, Death on the Nile) joins an all-star cast in the third series of critically acclaimed, Sky original drama Britannia. The series, which is currently filming in the UK, is an epic genre-bending tale of clashing civilisations and religions set in a wold of mythic Celtic tribes, psychedelic druids and terrifying Romans, as a young girl tries to build a rebel alliance with a group of misfits.

Created by the multi-award-winning writers Jez Butterworth, his brother Tom Butterworth and James Richardson. Britannia is produced by Vertigo Films and Neal Street Productions and brings a moment of our history to life like never seen before on TV with humour, heart and violence.

Sophie will star as Hemple, the wife of General Aulus (David Morrissey), who arrives in Britannia to find out why her husband has failed with Lokka’s mission to capture the chosen one, Cait. If he isn’t up to the job, she certainly is. Series three also sees the return of actors David Morrissey, Mackenzie Crook, Annabel Scholey, Nikolaj Lie Kaas, Julian Rhind-Tutt, Eleanor Worthington-Cox, and Zoë Wanamaker.