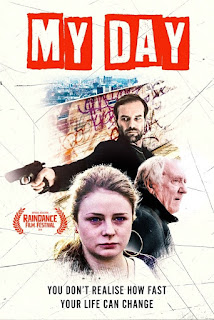 A darkly gripping drama shedding light on the grim realities of street life, My Day, the feature debut from one-to-watch South London director Ibrahim Miiro premiered at Raindance Film Festival 2019 to critical acclaim and is set for its UK digital release on 7 December 2020 courtesy of Patriot Films.
Life isn't easy for Ally (Hannah Laresa Smith), a deprived young woman living between an East London Estate and the streets of London, but she tries her best to makes ends meet by delivering drugs, keeping her head down and staying out of trouble…That is until what starts out as a normal day quickly turns sour when a customer takes advantage of her, leaving her hurt, humiliated, and in deep trouble.