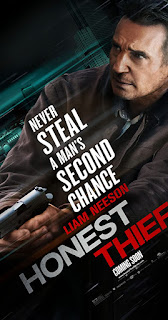 Signature Entertainment presents Honest Thief in Cinemas Nationwide from 23rd October
Thrills and excitement are up for grabs in HONEST THIEF which tells the action-packed story of a career bank robber keen to turn himself in for the sake of love, only to be double-crossed by two ruthless FBI agents.
Tom (Liam Neeson, Taken) is a lot of things, but two in particular: an infamous thief and a newfound romantic. His feelings for his new flame Annie (Kate Walsh, Greys Anatomy) have inspired him to right his past wrongs and leave behind his life of crime. Although he has always worked with integrity and precision, exclusively carrying out non-violent bank jobs, he does not want his relationship with Annie to be built upon lies. He resolves to turn himself in to the FBI and forfeit the money he has stolen in return for a plea deal and a clean slate.