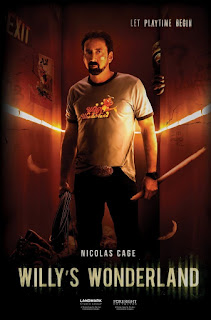 Willy's Wonderland (originally titled Wally's Wonderland) is an upcoming American horror film written by G.O. Parsons and directed by Kevin Lewis.
The film stars Nicolas Cage, Emily Tosta, Beth Grant, Caylee Cowan, and Ric Reitz.
A quiet drifter stranded in a remote town agrees to work as a night-shift janitor at Willy's Wonderland, a once-successful abandoned family entertainment center. However, his tasks suddenly become an all-out fight for survival when the facility's eight animatronic characters come to life and try to kill him. Now, teaming up with a group of teens who also find their way into the building, he is forced to defend himself in a desperate race to survive until morning.