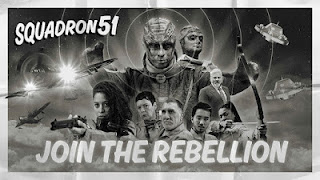 Prepare your battlestations; alien annihilation is on the horizon! Assemble Entertainment and China-based publishing partner WhisperGames have today announced the very first title to be published as a result of the intergalactic alliance: Squadron 51. This dimension-bending shoot-'em-up features 2D action in a world of deep 3D environments and is inspired by 1950s sci-fi icons such as War of the Worlds, Godzilla, and Dr. Strangelove. Squadron 51 is developed by Loomiarts and will launch its attack on Nintendo Switch, PlayStation 4, Xbox One, and Windows PC via Steam later this year.
Join the rebel cause as Lieutenant Kaya and face the unrelenting hostile alien aircraft, martian fighters, and monsters, all in the glorious black-and-white of the 1950s! The future of the Earth is in the hands of Squadron 51!
"We're huge fans of classic sci-fi horror and we jumped at the opportunity to co-publish Squadron 51 with our partner WhisperGames," said Assemble Entertainment CEO Stefan Marcinek.
"Squadron 51 has found a loving home among Assemble Entertainment's other award-winning titles known for their charming eccentricity. Fans of all genres will appreciate this delightfully original SHMUP."