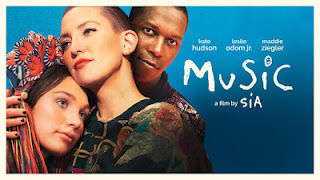 MUSIC is the directorial debut from multi-Grammy Award nominee, global icon and superstar SIA. The film stars Academy Award® nominee #KateHudson (Almost Famous), Tony and Grammy Award winner Leslie Odom Jr. (Hamilton) and Sia-protégé and breakout star Maddie Ziegler as well as Juliette Lewis (Natural Born Killers) and Ben Schwartz (Parks and Recreation).
MUSIC follows a 'newly sober woman (Hudson) figuring out her place in the world when she learns she is to become the sole guardian of her half-sister, Music (Ziegler), a young girl on the autism spectrum. MUSIC is about the magic that can happen when someone who cannot speak with words finds people who can listen with their hearts.