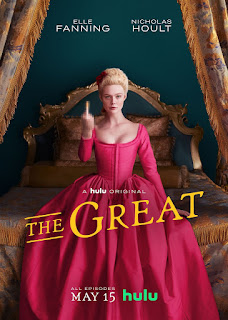 Gillian Anderson ("The Crown," "Sex Education," "The Fall" and "The X-Files") will join the cast of Hulu's critically-acclaimed Original comedy series "The Great" in a two-episode appearance as Catherine's (Elle Fanning) mother, Joanna.

Joanna is a glamorous socialite from Germany, sometimes also known as the "maestro of marriage" for her abilities to arrange high profile partnerships for her daughters. She has heard rumors of her daughter's coup and come to Russia to see it for herself. Though the apple of Catherine's eye and a doting mother, it soon becomes clear Johanna has more sinister intentions to save her family's reputation.
"The Great" is a satirical, comedic drama about the rise of Catherine the Great from outsider to the longest-reigning female ruler in Russia's history. With only occasional historical facts, the series stars Elle Fanning as Catherine, Nicholas Hoult, Phoebe Fox, Adam Godley, Gwilym Lee, Charity Wakefield, Douglas Hodge, Sacha Dhawan, Bayo Gbadamosi and Belinda Bromilow.