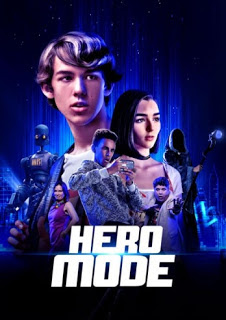 Get into character and activate Hero Mode, the entertaining gaming comedy from director A. J. Tesler (Campaign Trail, Magnolia's Hope). The film draws inspiration from classic and retro video games to create a nostalgic yet fresh story released on digital 14 June from 101 Films.
Teenage genius Troy Mayfield (Chris Carpenter – As Far As The Eye Can See, Amanda And Jack Go Glamping) has been coding since he could talk, and all he wants to do is design his own smash hit video game. When he's suspended from school for doing a good deed, his mother – and CEO of Playfield Video Games (Mira Sorvino – Mighty Aphrodite, Modern Family) – allows him to join the game design team. But being a prodigy who knows it all has its downsides, and Troy must learn that teamwork and listening to those around him are keys to success he had never considered before.
With Playfield Games facing financial difficulty and their lead designer Jimmy (Sean Astin – Lord Of The Rings, Stranger Things), refusing to cooperate, it's down to Troy to create the world's greatest video game to premiere at PixelCon, and he has just 30 days to do it before the company goes under…
Will Troy and the team be able to move past their differences and work together to save Playfield Games?
Get in on the action with Hero Mode, a fun family feature.
Released on digital 14 June 2021