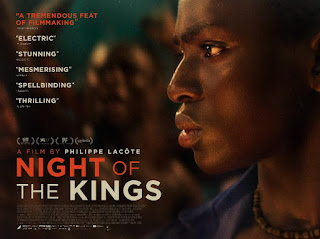 Altitude have announced that NIGHT OF THE KINGS, the acclaimed film from director Philippe Lacôte (RUN), will be released in UK and Irish cinemas on 23 July 2021.  The film received its World Premiere at the Venice International Film Festival in September 2020 as part of the Horizons section and went on to feature at the Toronto International Film Festival and New York Film Festival that same year. It was Ivory Coast's official submission for the 2021 Academy Awards.
Spectacular, thrilling and absolutely unique, NIGHT OF THE KINGS is both an exhilarating tale of survival in one of the world's most unforgiving environments and a beautiful ode to the power of storytelling.
When a young man (first-timer Koné Bakary) is sent to an infamous prison, located in the middle of the Ivorian forest and ruled by its inmates, he is chosen by the boss 'Blackbeard' (Steve Tientcheu, BAFTA and Academy-Award nominated LES MISÉRABLES) to take part in a storytelling ritual just as a violent battle for control bubbles to the surface. After discovering the grim fate that awaits him at the end of the night, Roman begins to narrate the mystical life of a legendary outlaw to make his story last until dawn and give himself any chance of survival.