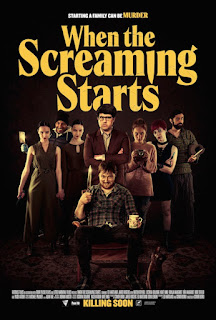 When the Screaming Starts, will have its World Premiere at FrightFest this August. Described as "If Louis Theroux met the Manson Family", the film will debut alongside this year's most prestigious and hotly anticipated horrors and thrillers at Leicester Square's Cineworld on 28th August. The film will have two additional screenings, one later that night and another on Sunday 29th.


The film includes Yasen Atour, who will star alongside Henry Cavill in the second season of The Witcher, as well as up and coming talent Ed Hartland (The Crown), Octavia Gilmore (For Sale) and Jared Rogers (making his second appearance at FrightFest following 2018's Killer Weekend).
When The Screaming Starts marks the feature debut of filmmaker Conor Boru, and was overseen by a production team which includes Dom Lenoir, who directed and produced the award-winning thriller Winter Ridge.