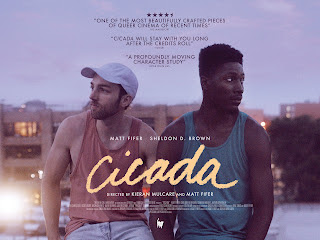 Released in UK and Irish CInemas on 21st January 2022
Matthew Fifer's directorial debut CICADA is a heartfelt and refreshingly hopeful tale that tackles complex subjects with grace, delicacy and uncompromising honesty.  Based on Fifer's personal experiences, the film launched at Outfest and has played to wide acclaim around the world, including the BFI London Film Festival.
Thirty-something New Yorker Ben (Matthew Fifer) is stuck in life - between meaningless hook-ups and awkward sessions with his free-spirited therapist, Sophie (Cobie Smulders, HOW I MET YOUR MOTHER). Things change when he meets Sam (Sheldon D Brown), a handsome stranger with whom he forms an immediate connection. As the pair while away balmy summer nights getting to know each other intimately, their layers begin to peel away, revealing the secrets and fragilities they must share if they are to truly let the other person in.