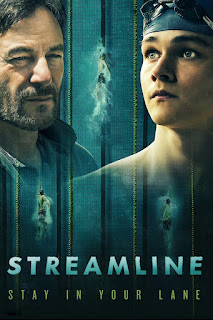 Dive into Streamline, an emotionally rich coming-of-age-film, and a supremely impressive directorial debut from Tyson Wade Johnston, who also penned the piece. This gritty and gripping feature is produced by Australian swimming legend Ian Thorpe and stars Hollywood favourite Brit actor Jason Isaacs (The Harry Potter Franchise, Mass) is now set to wow UK audiences with its digital release on 11 April from 101 Films.
15-year-old Benjamin Lane (Levi Miller – Pan, A Wrinkle in Time) is an introverted and gifted young swimmer, on the brink of qualifying for the Olympics. Pushed by his ruthless coach, Glen (Robert Morgan – Hacksaw Ridge) and his sacrificial mother, Kim (Laura Gordon – Undertow), it's unclear if he actually wants the life he's seemingly being forced to pursue.
When his enigmatic and estranged father (Jason Isaacs) is released from prison and tries to repair their damaged relationship, Benjamin struggles under the physical and psychological pressure and begins to self-destruct.
Drawn into the debauched lifestyle of his two older brothers, Dave (Jake Ryan – The Great Gatsby, Home & Away), and Nick (Sam Parsonson – Hacksaw Ridge, Love My Way), Benjamin is pushed to the limits as he's forced to grapple with deep-seated childhood Raw and masterful coming-of-age drama sees gifted swimmer contend with trauma and toxic masculinity – can he stay in his lane?
Out now at https://apple.co/3E5xrK7