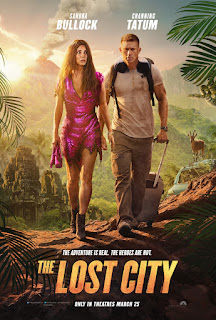 Sandra Bullock plays Loretta Sage a middle-aged romance novelist, she writes books about a fictional hero called Dash McMahon, he is portrayed on the book covers by model Alan Caprison played by Channing Tatum.
Loretta's publicist Beth Hatten played by Da'Vine Joy Randolph, insists that Loretta needs to go on a book tour with Alan to help promote the newest book release.
The book launch starts badly and gets worse, Alan loses his wonderous long blonde wig, and falls off the stage, after the event Loretta is kidnapped by billionaire Abigail Fairfax played by Daniel Radcliffe. He has figured out that Loretta has based her books on a real historical event, and includes research she did with her late husband who was an archaeologist, and that she has been able to decrypt an ancient language, with this knowledge he hopes to find the location of a Lost City, and specifically the "Crown of Fire", Loretta is being forced to help him.