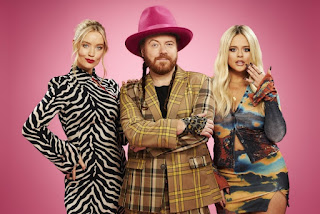 After an incredible 26 series on ITV2, the multi award-winning Celebrity Juice is going out on a high! The outrageous, channel defining panel-show which has been hosted for 14 years by the one and only Keith Lemon, is to conclude later this year with two fantastic farewell specials celebrating all of Juice's maddest moments.
The BAFTA and National Television Award-winning programme, which has almost 300 episodes, has seen Keith playing the craziest games and sharing the biggest laughs on-camera with stars like Ed Sheeran, Pamela Anderson, and Will Mellor. Celebrity Juice was founded by Keith and the original team captains Holly Willoughby and Fearne Cotton back in 2008. In season 24, the amazing Emily Atack and Laura Whitmore assumed the role permanently, but Juice had a fantastic cast of team captains prior to that, including Gino D'Acampo, Mel B, Paddy McGuinness, and Kelly Brook.


Keith Lemon said:
"I remember doing the first episode thinking wow that was fun! In the V/O in opening titles I said it was the best telly show on telly. Whatever you thought of it, it was definitely the best fun making it. An amazing team, and amazing guests, but all good things must come to an end. I'll miss it, and everyone so much, but on to the next chapter and I look forward to going out in style on the specials! All t' best and good luck with ya business!"